Did you know that many fertility patients don't need IVF? With all of the information about in vitro fertilization that goes around the Internet, it might seem otherwise. But the truth is that many people need a far simpler boost in fertility than IVF affords. 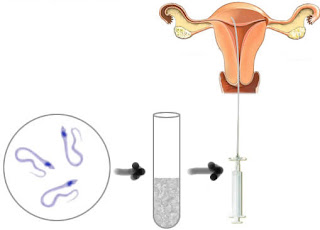 Intrauterine insemination, sometimes simply called artificial insemination, is very often a first step for fertility patients who have no structural infertility conditions, like blocked fallopian tubes. The insemination itself is conducted in less than a day within the clinic, and patients are able to return immediately to work and other daily activities. Prior to the actual insemination procedure, the woman may or may not use fertility medications oral or injectable, depending on her body's needs to optimize the number of eggs she ovulates during that treatment cycle. Then when tests indicate that she is near ovulation, semen (from either a partner or a donor) is introduced to the uterus via a tiny catheter threaded through the cervix.

Placement of the sperm cells directly into the uterus via IUI allows us to bypass what's sometimes called hostile cervical mucus, a condition in which the woman's naturally-occurring mucus has properties that prevent sperm from reaching their destination. IUI also works well for women who have timing issues that prevent intercourse from being the optimal route; for example, some active military couples have frozen semen prior to deployment, for use with IUI at a future date. IUI enables even fertile women without male partners to use donor sperm in a clinically safe manner. Women with PCOS (polycystic ovarian syndrome) also are often quite successful in getting pregnant with medicated IUI.

There are cases in which trying IUI might be more wasteful of the patient's time, money, and effort, including patients with:

It is recommended that patients in such cases consider using IVF, in vitro fertilization.   ~Dr. Sonja Kristiansen MD