Freezing eggs is a means of fertility preservation offered through our Houston practice.

ICSI has been one of the greatest advances in the treatment of male factor infertility. ICSI involves injecting a single sperm into a mature egg. This procedure involves an embryologist manipulating under a microscope a mature retrieved egg while injecting a micro needle loaded with a single sperm directly into the mature egg. This advancement in the hands of an experienced embryologist can increase the probability of fertilization to as much as eighty five percent. Indications for the ICSI procedure include couples with:

Failed fertilization of embryos on prior IVF attempts.

Pre-implantation genetic testing/diagnosis is performed at our Houston practice to check for chromosomal or genetic abnormalities.

PGT (also known as PGS) can screen for chromosomal abnormalities that can cause miscarriage or prevent pregnancy from occurring while also checking for certain genetic disorders, such as Down's syndrome-much like the amniocentesis test. PGT-M (also known as PGD) involves taking a single cell from a developing embryo and analyzing its genetic makeup. This is done to find chromosomal and genetic disorders early. PGT-M can be used for couples that are at risk for transmitting a genetic disease to their children such as Cystic Fibrosis, Sickle Cell, Tay Sachs, etc. PGT/PGT-M does confirm the sex of the embryo as part of the complete chromosome report. 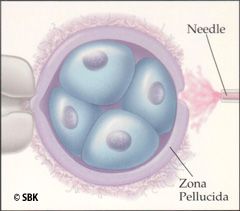 This technique is used to improve the embryo’s implantation. Assisted Hatching involves opening a small hole in the outer membrane known as the zona pellucida of the embryo. This opening allows the embryo to leave its “shell” and implant into the uterine lining.

Cryopreservation (freezing) of embryos (fertilized eggs) is utilized when the number of embryos produced during an IVF cycle exceeds the number of embryos placed in the uterus on day three or five embryo transfer. Once frozen, these embryos may be thawed and transferred in another cycle at a later time. Gamete cryopreservation (freezing) is used to freeze eggs or sperm so that it can be used at a later time.

A semen analysis measures the quantity and quality of the sperm. Several characteristics are examined, including the ability of sperm to move (motility), forward progression (the quality of movement), sperm count (the number of sperm), volume of semen (the total amount of ejaculate), as well as the size and shape of the sperm (morphology).

This is a process to remove the sperm from the ejaculate. This provides a highly concentrated amount of sperm that can then be introduced into the cervix or the uterus.

Time Is Running Out

Houston Fertility Center is the first clinic in Houston to offer INVOcell - a new, revolutionary and affordable treatment option for $6,300 per cycle!  Must meet eligibility requirements.  Medication costs vary depending upon the pharmacy. Schedule an appointment to take advantage of our current cycle rate before time runs out.

We are also proud to now offer Natural Cycle INVOcell, Reciprocal INVOcell and PGT with INVOcell. Call for details and
Schedule your consultation today to learn more.